I’ve always dreamed of an inside-outside house.  A dwelling place where the boundaries get a little blurred and I don’t feel so much like I’m trapped in a box.  The dogs and cats appreciate not having to wait for a human to open the door and I love hearing the insects and chickens and cardinals and the wind in the trees.  I also love the privacy of living in a green bowl surrounded by trees and shrubberies.  Walking back down the driveway with my mail,  seeing the random gardens and the laundry on the line, the magnanimous front porch where we share meals and hatch plans and talk and laugh and sometimes simply sit and ponder, watching the goats and the chickens foraging, Brownie sleeping at the top of the steps and sun tea brewing in a gallon glass jar – I am happy.   This is a good place for me to be.

When my folks arrived they wanted to help get the house in better shape heading into next winter.  We discussed various ideas over the ‘phone until Saint George pointed out that the Bible says a house must have a solid foundation – and that we needed to start by leveling the floors.  Of course.  Let’s start with the dining room as it’s the most desperate.  My folks arrived a day late due to cancelled flights and an unexpected night in Chicago.  The 4th of July found mom and I in Oxford, MS with a wagon train of Home Depot carts and half the young men in the store helping locate and load cinder blocks and cap blocks by the score, 6×6 beams for the house to rest upon, highly specific nails and bolts and screws, a 5 gallon bucket of KILZ, etc, etc, etc.  Then all of these things had to be loaded onto a 16’ long flatbed trailer and driven carefully home.  Meanwhile, back at the Smallholding, Dad and George and Fox were disemboweling the dining room and coming to grips with the extent of the problem. 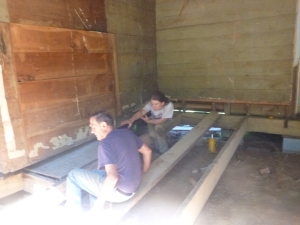 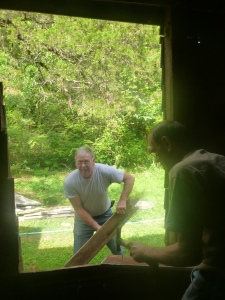 Gryph was busy painting closets: a Fire closet in which to store winter blankets, linens, towels, etc.  and an Air closet for hanging clothes.  I love them.  The shelves are made of bamboo, cut to length and laid side by side with their ends supported by small wooden ledges. There’s a beautiful stand of bamboo invading the forest, coming through the fence from Jo’s place.  If you’re going to be invaded, bamboo is a lovely and useful thing to be invaded by.  We’ve been harvesting carefully selected canes for various purposes, like hanging a privacy curtain around the outdoor shower and shading Vienna (as the soaking pool has come to be called).  Free and renewable construction materials are a blessing. 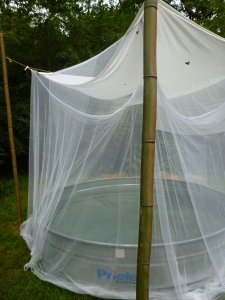 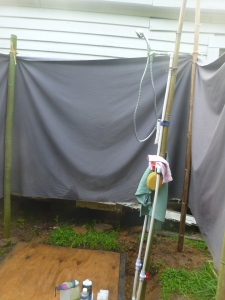 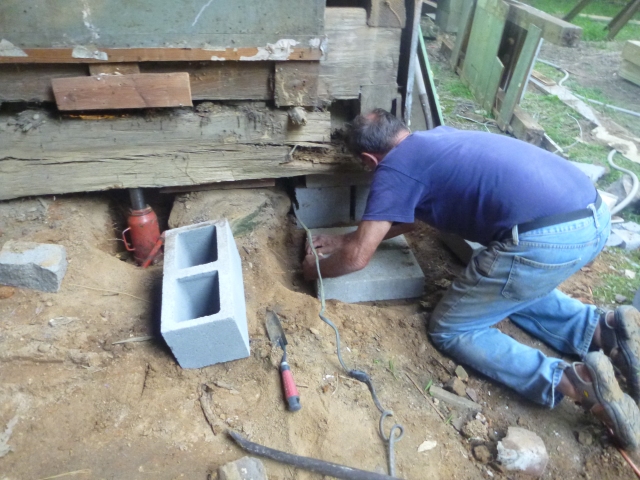 For several days in early July, life as we knew it was suspended and revolved around jacks and crowbars, saws and mallets and shovels.  The wall between the dining room and the great-out-of-doors disappeared and will be replaced by summer screens and winter insulation panels.  The wall between the dining room and the kitchen disappeared in favor of an eventual bar/counter top.  The floor disappeared entirely and cinder block steps were constructed to ease travel between the kitchen and the rest of the house.  Years ago, the kitchen was a separate building – the connecting dining room was a later addition (and not properly tied in to the rest of the structure) so this was a taste of what that time might have felt like (with the added modern bonus of hot and cold running water and electricity.)  There were scary moments of living in “Big Creak” as the weight of the house shifted and adjusted.  Mom and Gryph were Herculean in cleaning and organizing the shifting kitchen – and the weeding and garden chores I’d fallen woefully behind on were caught up by the end of the week despite heat and humidity well beyond the call of duty.  My amazing mother even managed to figure out how to weed the millet, which looks very like the grassy invaders it was infested with. THEN it was time to head off to a family reunion in Missouri, leaving the construction carnage behind. 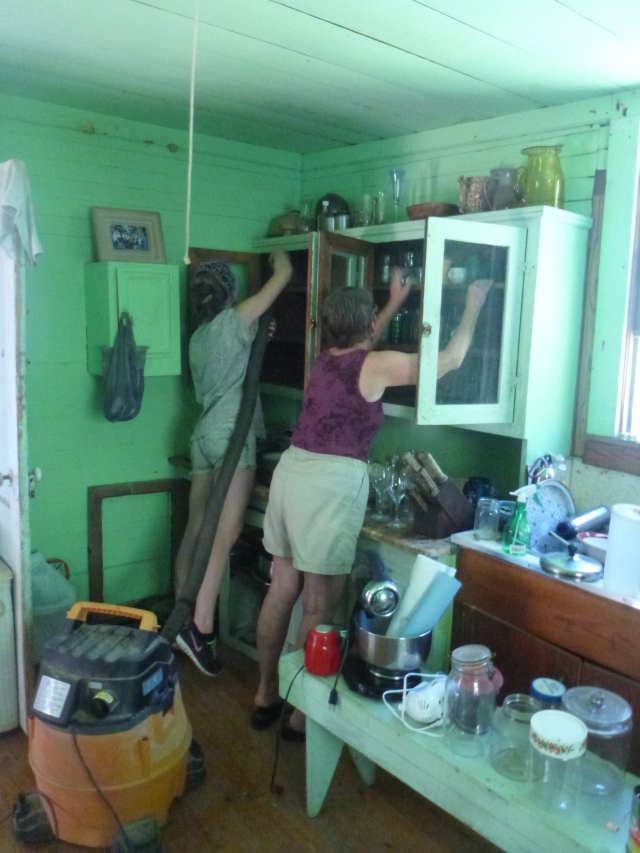 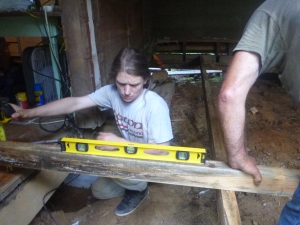 At this point, largely thanks to Saint George, the floor joists are in place and enough of the floor boards are down that in-house navigation is no longer a hazard.  There’s a wide open space instead of a dining room wall.  It’s actually glorious in an strange (and knowing it’s temporary) sort of way.  The entire kitchen is very much an inside-outside space and it’s working just fine.  Mosquito nets have helped immensely in terms of getting a midsummer night’s sleep and the unseasonably cool weather we’ve been enjoying lately has me lulled into an obviously false sense of my ability to handle summer in Mississippi with no air conditioning.  On a hot day, a Vacation to Vienna helps immensely – soaking in cool water in the shade lowers the entire body temperature very quickly and even a five minute visit makes the next hour much more tolerable.

Summer is a strange combination of busy and slow, accomplishment and sloth.  Everything stops while the hummingbirds attend to the zinnias.  The dogs have the most regular routines in the house.  The prevailing relationship between humans and insects ranges from fascination to irritation.  The bees visit the Basils every day, making me wish I had a hive for them to live in (basil honey?  please!?)  Some of the hugest dragonflies I’ve ever seen swoop across the garden, along with multicolored moths and butterflies, large and small. Epic struggles transpire between spider and hornet, That One and a June bug.  I love the nights I drift off to glimmers from a firefly that has strayed inside.  When did I become so accustomed to sleeping inside every night?  What’s keeping me from stringing my hammock up outside and sleeping in my forest instead of inside my stout log cabin room?  On the other hand are mosquitoes, ticks, fleas, horseflies, hornets and midges.  The less attention we give those sorts the better. 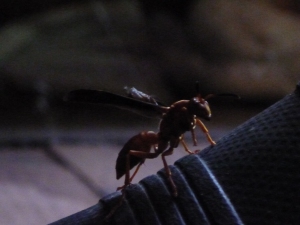 There’s a new hen in the flock, a white Leghorn named Tart.  She arrived from Jess’s where she was the lone remaining member of a flock.  She’d survived there, solo, for most of a year until one day Saint George brought her home.  This was a good thing since Stretchy had disappeared under the house at the end of June taking her daily egg with her. Occasionally one of us would see her, so we knew she was still alive, but when the rest of the flock went to roost she was conspicuously absent.  Jo assured us that she was setting but nobody had seen an egg and we weren’t even sure of her nesting place.  I thought she was probably delusional and hoped she’d eventually get hungry and come out to join the rest of us again.  Then last week she showed back up with two little mushroom-headed chicks.  I’ve been calling them “Bait 1” and “Bait 2” – but they’re not dead yet!  Good Momma, bringing them about and teaching them to forage by day, tucking them in under her wings under the house at night. 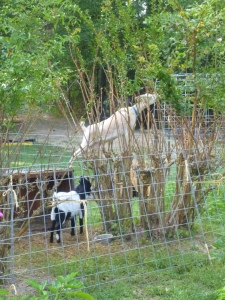 The ponies are back in the close (1 mile away) pasture where it’s easier to visit with them. Wednesday Saint Finehorn finally decided Gryph had done enough penance and allowed her up for a ride.  When they returned to the pasture Jesse James let them know in no uncertain terms that he was mightily upset to have been left out.  As I type, Gryph and Fox are bringing both of them back to the house to get tacked up for a ride.  Hopefully by the end of the summer Luna Jack will be coming along as a riding horse as well.  The urge to go walkabout is strong but Fox reminds me that I have a book to write before I can go on another adventure (so I’d best get rolling on that project!) 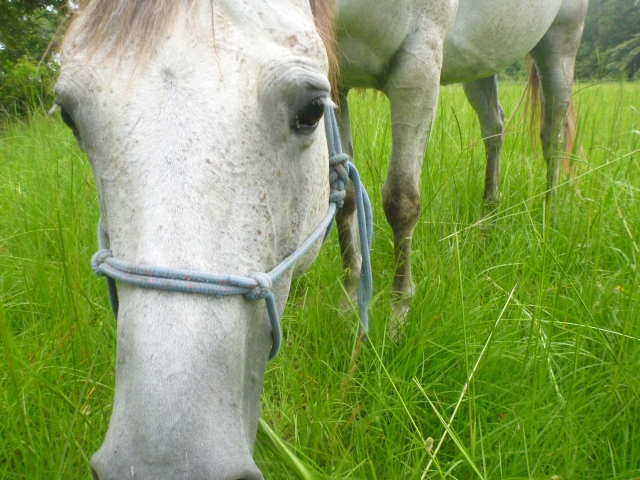