i had a fry cook dream the other night
i was working at a cafe
that catered to creatives
it was called the blank canvas
the menu was a blank page
a writer came in and ordered an oxymoron
so i sent out jumbo shrimp
i awoke in a panic
– what if they’d asked for an extended metaphor?

A month and a half ago I sent that in an e-mail to my friend Tom in Ireland.  I was feeling frustrated about my progress (or lack thereof) writing much of anything, much less anything that I felt was “good enough” for “the book”.  He wrote back instructing me to “go to here: (insert the above) and stay there, regurgitating…”  I knew what he meant and I knew he was right but I was in the middle of everything and couldn’t figure out how.  July was swallowed whole by visitors and projects and while it was a great month on many levels, sitting down and writing wasn’t exactly one of them.  And then it was August which started out with three shifts in two days at my waking life job as a fry cook.

So then it was Sunday and I was out of excuses.  I wrote the dream on an index card and pinned it to the porch railing.  With the encouragement of my cohorts I set up a wee cafe’ on the front porch and I’ve been going there every day since.  As small as it sounds I’m aiming for “at least” 500 words a day and I’ve been doing it.  Not every day’s writing is brilliant, not every day’s writing is aimed at “the book” because that’s not the point.  The point, as far as I can suss it out from here, is that the only way to get better at writing is to write and keep writing, because that’s what writers do.  And they do it even when there are other things to be done.  They do it even when they’re not in the mood.  And e-mails don’t count, although today’s blog post does – because I spent the morning on editing and re-writes (after working with Gryph to restore and reseed some of the lettuce pallets.)

One of the difficult things about writing is that it often looks a lot like sitting around  doing nothing.  Last week, while I was writing, I had a visitor who walked up on the front porch and asked me “Whatcha doin’?”  I said that I was writing, working on the book.  She asked a few more questions and then asked “So, have you accomplished anything productive today, or just… writing?”  (she waved her hands dismissively at my computer on ‘writing’).

Well guess what!?  If I’m going to be a Writer and eventually have a book Written, then probably The Most Productive thing I can be doing is: Writing!  And I’m claiming that.  I know there will be days I don’t manage to write.  There will also be days that I let the world fall apart around me because I’m Writing.  The beauty of a cafe’ is that it’s absolutely appropriate to ignore the other patrons, to disappear into my own little world, and Write. I’m not being rude, I’m working.  😉 Thanks for the encouragement! 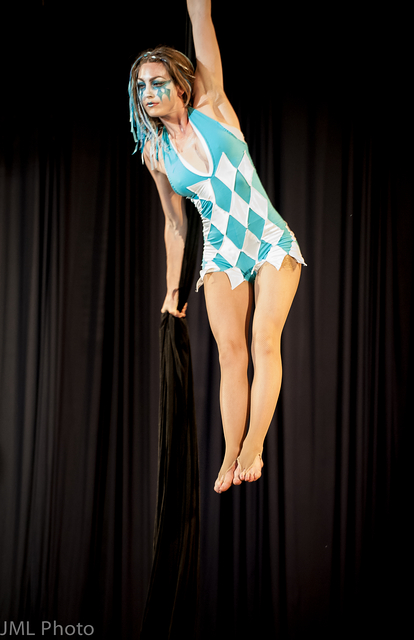 Speaking of work, that’s Gryph, on silks during her final performance at NECCA (Circus School).  There are more photos up on her blog at:  www.finehornsfancy.wordpress.com.  While you’re there be sure to check out her paintings by clicking on the words “Art Portfolio” over on on the left side of the page.  It was a huge encouragement to her when one of her paintings sold last month.

Oh, maybe I should ask for opinions on this one.  Along with the sage advice recounted above, Tom wrote: “Treat your material with Irish flexibility of factuality, no one, other than the worst of muggledom, wants to hear bald truth! People subconsciously require to be shaken awake with that which is, at the least, unlikely, and at the most Elysian fantasy.” True or False?

4 Responses to The Blank Canvas