Finehorn and the Runaway Christmas Tree

This morning I looked out into the back yard and saw a large Christmas tree lying on its side. It needed to be transported roughly 400 feet to the front porch.  Thinking of Saint Finehorn’s future, I volunteered.  Never mind that she’s not yet trained to harness nor has she ever pulled anything in her life.  Never mind that I don’t have a harness, or even a western saddle with a saddle horn. She’s steady minded and we have a good working relationship, how hard could this really be?  I grabbed two western girths and some rope from the garage and went out and caught Finehorn.  She stood quietly while I tied the two girths into a collar of sorts and seemed happy to be finally Doing Something.  I led her out to the cut pine tree and attached a rope from the tree to one side of her makeshift collar.  “Step Up.”  She knows the command and moved forward, felt the weight of the tree and stopped, looking a bit confused.  I praised her and asked her to move forward once again.  She complied, the tree moved, she skittered a bit, grinding her teeth, then settled down.  I told her what a brilliant pony she was.  She was licking and chewing, obviously thinking hard about this new situation.  We tried again but she kept moving sideways so I wised up and fashioned the rope into traces, one on either side of her, both fastened to the tree.  This was much more to her liking and very quickly she was walking calmly across the lawn, dragging the tree, looking quite proud of herself.  I praised her lavishly and we approached the gate. 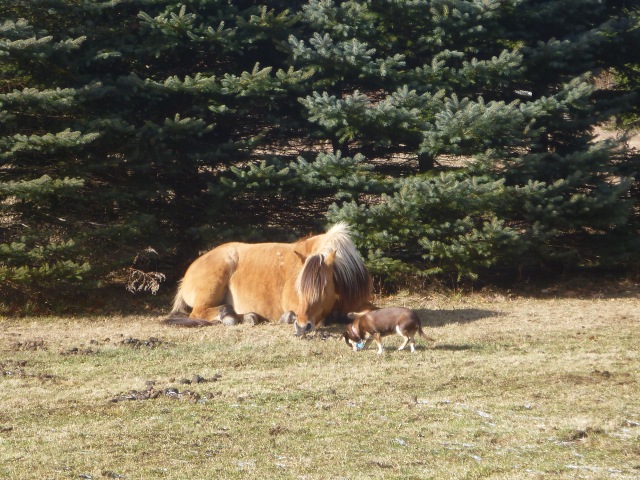 Jesse James meanwhile had been pawing the ground, lying down and rolling, jumping up and snorting, much more agitated about the situation than Finehorn.  I was ignoring him; focused on Finehorn and the job at hand, thinking it didn’t really have much to do with him and he was just being silly.  I’ll know better next time!  When we got to the gate I said “Whoa, stand.”  Finehorn stopped and stood calmly and I opened the gate as wide as it would go (just barely wide enough for the tree), then returned and asked her to “Step up.”  As she stepped forward Jesse rushed the gate, leapt over the tree and headed toward the road, tail in the air.  Finehorn followed, tree in tow, and I was left behind with my heart in my mouth as the careening tree narrowly missed the Jeep, the Prius, the mailbox – and hit the road at a run.  I grabbed Jesse’s halter from the fence and gave chase.

Jesse didn’t go far.  I caught him right in front of the house, put his halter on, led him back into the yard, shut the gate and went off in search of Finehorn.  Finehorn was headed towards town, and the golf course ($150/hoofprint!) and by the time I got back out to the road she was out of sight.  Not good.  I went running down the road, berating myself for letting a positive training experience turn into a disaster, wondering if she’d ever be willing to pull anything behind her ever again.  As I’d been catching Jesse I’d seen somebody in the road with their arms out trying to stop Finehorn but there was no sight of anybody now.  Of course I didn’t have my glasses on.  I saw a bundle at the end of the neighbor’s drive and wondered what had gotten destroyed but as I got closer it turned out to be a dropped armload of firewood.  I literally couldn’t see to the end of the road.  At least I hadn’t heard squealing tires or the sounds of a collision…

My folks had been out walking the dog in that direction and my hope was that they’d managed to intercept her without getting run over by a stampeding pony or broadsided by a renegade Christmas tree.  Finally I saw a dark shape of about the right size at the end of the street.  I kept running, feeling a bit more hopeful.  As I approached the dark shape resolved into the form of our good neighbor Evan, leading Finehorn (with the big pine tree still in town behind her) calmly up the road.  He’d hopped in his car, managed to cut her off at the pass, gotten her calmed down – and she was fine!  I thanked him profusely and he went back to retrieve his car while I walked Finehorn back to the house.  Several treats and much praise later we delivered the Christmas tree to the front porch just as my folks walked up with the dog asking “What happened?  Evan wouldn’t tell us!”

I think it turned out to be a pretty good first lesson for Finehorn after all, especially since she didn’t manage to get rid of the tree (or get hurt!)  It was also a good lesson in the importance of good neighbors!  It was also a good reminder for me not to ignore mr.James; even if he’s not directly involved in something he still takes his role as herd protector seriously and the sight of a horizontal pine tree chasing his mare around wasn’t something he took lightly.

9 Responses to Finehorn and the Runaway Christmas Tree