Crossing the Beaver at Wampum

I rode into Pennsylvania around noon on Saturday on quiet back roads shaded by trees.  There’s still a whole lot of corn growing in these parts, and soy beans, but also plenty of forest and wetlands.  Saturday afternoon a man on a tractor pulling a brush hog shut down his machine as I approached and started a conversation.

this brush hog was friendlier than the last

I wound up camping on his land, tethering the ponies and slinging up my hammock in a sort of tree cave hidden by the Arrborvitae.  The ponies drank from the pond and the trains whistled by with amazing frequency, muffled a bit by the greenery.  (I love the sound of trains – best lullaby.)  Rabbits and wild turkey came by and just as I was drifting off to sleep a deer coughed in discomfiture at my unexpected presence; the sound was close and he was pretty persistent about it, going on for a good 5 minutes!  In the morning I found the trail, about 15′ from my camp.  It seems that I was blocking the main path from forest to graze.  Oops! 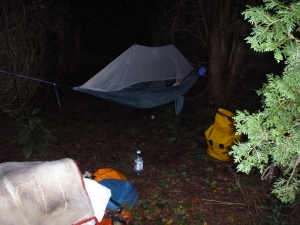 On Sunday I saw a sign for the North Country National Scenic Trail.  I saw the dotted line on my DeLorme atlas page and saw that it crossed the Beaver River at Wampum.  Happy day!  The trail was lovely, freshly mowed and didn’t look like it gets much use.  The ponies and I wound through woods and beside meadows, crossing the occasional small bridge and listening to the roar of highway traffic (at first) and later the mosquito whine of off-road motorcycles and ATVs.  Part way through the morning at a road crossing I saw a sign proclaiming the trail to be for hikers and other foot traffic only “to ensure a premier hiking experience” but since I saw no hikers and was following tire tracks most of the time I decided that the ponies were on foot and if necessary I could dismount and walk as well.

At one point we came up on an area near an ATV campground and stopped and stepped off the trail just in time to keep from being run down by 4 motorcyclists covered in mud, their helmets so splattered that it’s probably no surprise that they didn’t even notice me standing 3′ off the trail.  After that we took the road, stopping briefly at a trailer to ask directions.  The ponies were offered corn and nectarines which they enjoyed until the man who was feeding Jesse, with absolutely no warning or provocation, smacked him right on the nose!  I hadn’t been talking politics, Honest! but as he started ranting about how “we” need to take “our” country back from the liberals (he was being pretty racist into the bargain) and how I shouldn’t go into New Castle without a gun (I hadn’t planned on going into New Castle at all… )  I flipped Finehorn’s rope up over his head and (thinking that it would be a sad country indeed if it were made up entirely of his kind) we made our escape into Wampum where the ponies and I met very nice people of various colors and stopped for a quick bite of lunch before crossing the Beaver River on a nice wide cement bridge. 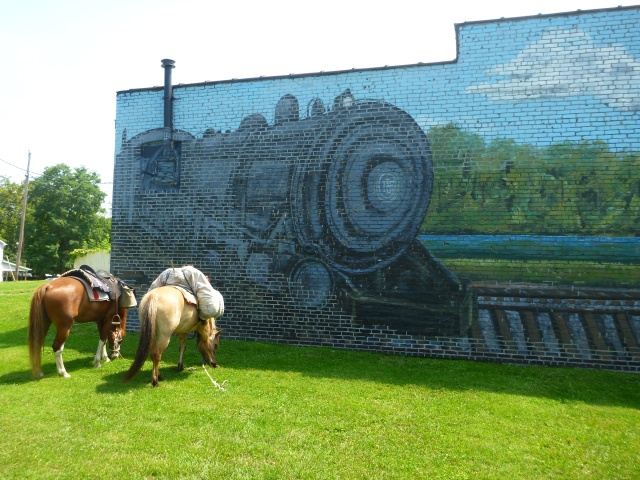 We picked up the trail on the other side of the river after a brief section of road riding.  The trail through the woods was quiet and cool in the afternoon sun and I was thinking about Civil Disobedience and the Commons and wondering if using an underused pedestrian foot trail for equestrian through travel qualified when we came to an obstacle.  It was a creek in a deep sort of ravine with a bridge across it.  The ponies are very good about crossing bridges of all sorts but this one had railings too narrow and tall to allow Finehorn to navigate while wearing her packs.  Rather than unload her, we turned around and I started scouting for an alternate route and came upon an ATV track heading in a viable direction.  Listening carefully, I followed the trail down hill until it came out into a meadow behind a house.  As we crossed a flat metal bridge across the creek, heading towards the road, a man came out of the house.  He was friendly and helped me figure out where I was on the map related to the roads and then said that we were welcome to camp in the back meadow if it wasn’t too early in the day to stop.  There was a spacious tent already there and plenty of grass for the ponies and my choice of a cool swimming pool or a hot tub (or both if I so desired.;-)) 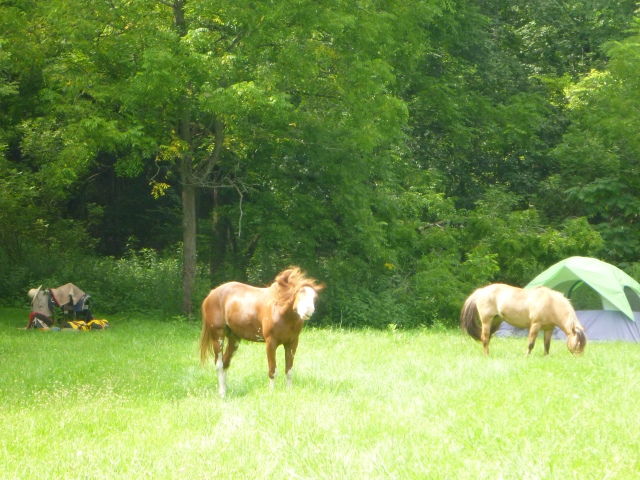 The ponies wasted no time in accepting the offer, chowing down on the grass like I’d been starving them and I very much appreciated the chicken soup and apple pie delivered to the tent later that afternoon.  The hot tub did my muscles a world of good last night and today I’ve taken some time to get organized and caught up on chores.  Pennsylvania: so far, so good! 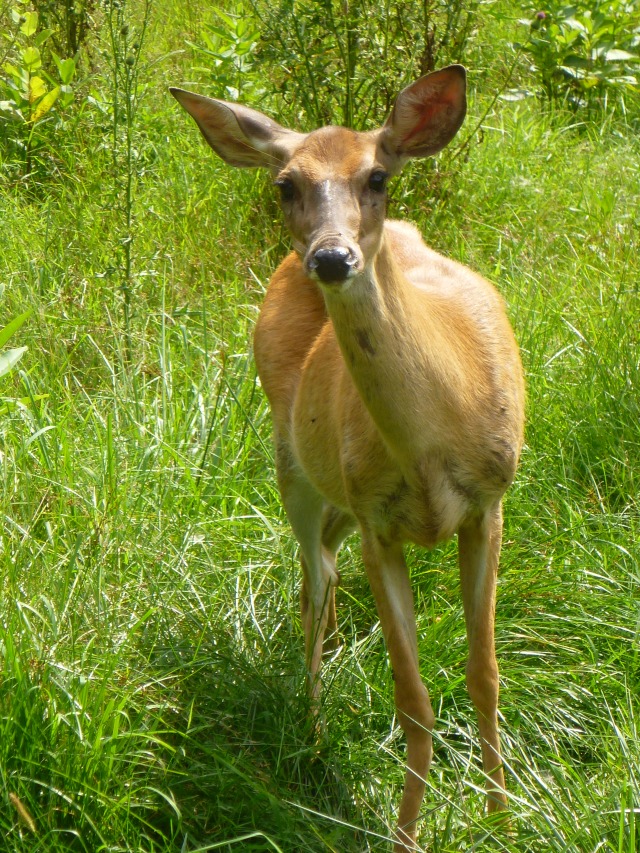 4 Responses to Crossing the Beaver at Wampum