Yesterday the ponies got up on the wrong side of Bedlam.  They’d spent three nights in a row tethered in fairly close quarters – Jesse had managed to get himself wrapped around a tree two out of those three nights and Finehorn the last one – they’d been rained on, the ground was squishy, the road wasn’t an easy one and they had 36 hours of pasture paradise fresh in their memories.  I’ve had many many people comment that by this point my ponies must be “broke to death and bomb proof.”  That would seem to be a logical supposition.  However, let me tell you about yesterday…

Mr. James was boogered before we even said good morning, staring off into the woods, ears alert and neck muscles tense.  I scratched his neck and he ignored me; I’m not even sure he noticed me tacking him up.  Finehorn was Mz Grumpy.  Acting all stiff necked and resentful of anything I asked, deigning to eat a few almonds and then looking away.  I got them tacked and packed and ready to go without incident, but it felt like we weren’t talking to each other and I wasn’t even sure why.  This wasn’t snubbing, not personal, but more like they were just each out of sorts and there was no fixing it.  The only option was to get on with the day. 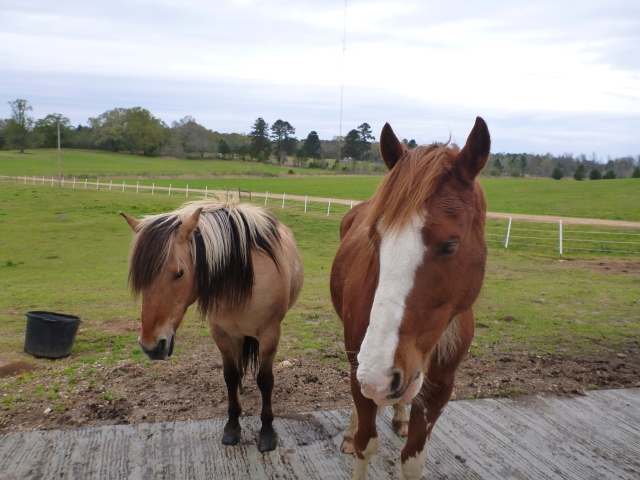 Finehorn tried to lose the packs twice in the first two hours, scooting around past us like she was spooking.  Finehorn pretty much never spooks.  I don’t think that pony is scared of anything but being stuck inside and owls taking flight directly under her belly.  She learned this behavoir when I was trying to pony both her and Luna Jack but within two days of being back to a trio she knocked it off and hasn’t tried it since then – ’til yesterday.  Each time she rodeo’d the packs shifted enough that we had to stop, unload down to the foundation packs, straighten those, reload and retie, wizards cloak and diamond hitch, find a ditch, then convince Mr. James to stand in it (he hates squishy) so I could remount and ride on.

Finehorn’s third trick was to get the rope under Jesse’s tail.  He hates that so much!  I dropped the rope and it was out from under his tail almost immediately, but he stood and clamped and trembled ’til I got off and gave him nose kisses and let him hide his head in my arms for a minute.  Serious trauma for poor Mr. James, but at least no rope burns. 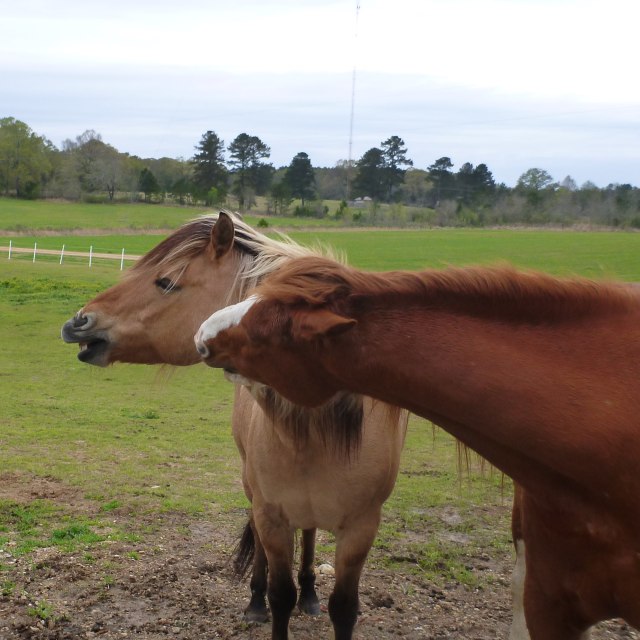 22 is a beautiful road with a narrow shoulder and a frightening number of road-kill deer.  I’ll spare you the photos, but there were two that looked as fresh as last night and the carcasses ranged back through varying levels of decimation all the way to bones.  Dead buzzards too.  Not to mention dead skunks, armadillos, possum, cats, rabbits…   Then there was the charred and split lightning hit tree that still smelled new.   All in all – not comforting.

The Mayor of Flora had suggested I take the new Parkway around Canton.  A few more miles of travel but a good wide grassy shoulder (and since it had only been open 3 weeks -perhaps less in the way of beer bottles, cans, fast food wrappers and general detritus thrown from passing vehicles? Yes!)  As I was just about to turn onto the Parkway a white mustang convertible pulled up and a smiling woman got out.  “Eaten yet?”  She had brought me chicken gumbo, which I instantly set aside when she revealed a fresh salad of baby greens, artichoke hearts, mandarin oranges and feta.  Yum!!!  We visited as the ponies grazed and I devoured healthy fresh greens.  (ate the gumbo for lunch today ;-)) 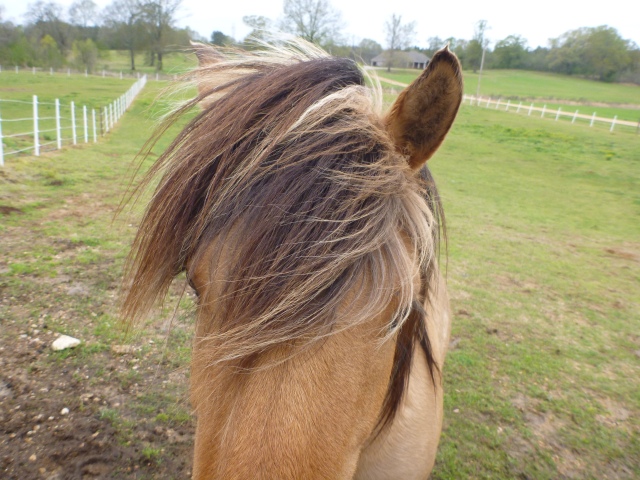 I checked with a passing sheriff to make sure I was allowed to ride the new Parkway.  (I can’t take the Natchez Trace with the ponies, cuz it’s a “Parkway” – I haven’t met a single person, law enforcement or otherwise, who thinks that’s a good law, by the way – but neither does anybody have a clue who made it or how to go about changing it.)  He said that nobody would bother me, and it was a very good road, the ponies handling the high bridges with aplomb and drivers slowing courteously.  Then we were on 43…

By this point Finehorn had pretty much gotten it back together, but suddenly Mr. James was a nervous wreck.  Spooking at trucks, spinning and shaking and just really not ok.  I got off and lead him and that helped a bit but he was seriously not a happy camper.  He’s gotten really strange about school busses specifically,  jerking his nose up at them like he’s conveying something very rude.  This is relatively recent and I’m not aware of a school bus having done anything unpleasant to him. 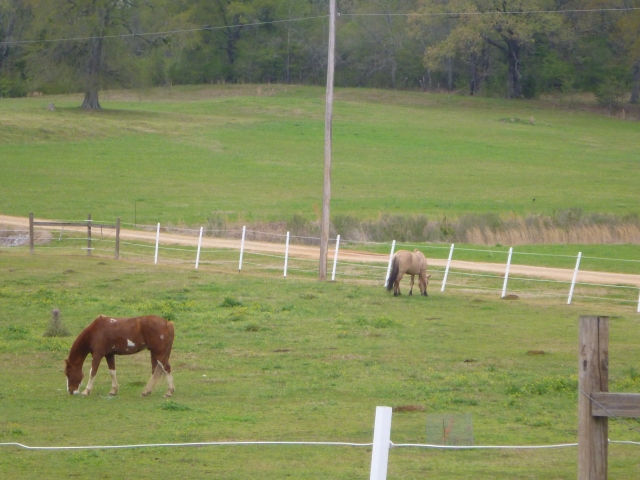 I was alternating between riding and walking, depending on the shoulder and Jesse’s demeanor.  During one of my riding phases a truck pulled up and a man asked if I needed a ride back to my trailer or anything.  I explained and said that I didn’t need anything but a place to stop for the night in the next few miles.  No problem, you can stay with us!  He pulled a business card out of his pocket which proclaimed him a farrier and gave me directions to his farm and the code to the gate.  A sigh of relief and the end of the day in sight.  Today is cold and rainy, the ponies are roaming  a grassy paddock, my clothes are in the washing machine and I am grateful to be inside.  I’ve found a smaller road to take between here and Thomastown – and hopefully things will be happier in pony world by tomorrow morning.

(there is a stall open for him right next door)