but I’m getting ready to disappear again for awhile!

I’m sitting in a lovely old (1800’s) Adobe house just outside of Abiquiu, NM trying to get caught up on “office chores” after a lovely week in the Santa Fe National Forest.  (Although it certainly didn’t start out as a lovely week!)  I’m learning that first impressions aren’t necessarily accurate in New Mexico.  As I crossed the border from Arizona, this is the first thing I saw:

When I walked into the Jemez Pueblo Ranger Station to buy a map of the Santa Fe National Forest and get information about trails and water availability what I heard was basically: “Welcome to the National Forest.  Stay on the Roads.  What do you mean you don’t have a vehicle?  Horses aren’t allowed anywhere near Any of the hot springs.  You should have gotten a trailer ride over to the far side of Santa Fe.”  The hiking trails had been largely taken off of the new map to try and keep the ATV people from driving on them and messing them up and there were none of the old maps available.  I felt like an unwanted anachronism and a bit of a nuisance.  The ranger was unhappy that I didn’t have a GPS because the rescue squad used GPS coordinates to rescue people and how would I be able to provide them?  I could get no information about water sources beyond the very immediate area (“that’s not our district”).   I pointed out that if i could get accurate information about water and trails I probably wouldn’t need to be rescued.  Never mind that there’s no cell ‘phone service in most of the forest – so how was I going to call with the coordinates in any case?  I left the office feeling frustrated and worried.

The first night we camped along a nice creek in a stony parking lot with more broken glass than graze.  The canyon walls were steep.  What had I gotten us into?  In the morning I packed up early and we headed up a narrow rocky road, staying well to the edge and alert as we were frequently passed by cars and ATVs and SUVs and pick-up trucks pulling large campers.  Most of them slowed down when they saw the ponies but this wasn’t my idea of a good time.  We came to cattle guards and I got off to open and close gates.  At one of these stops I lost my cell ‘phone and had to go back 1/2 a mile to find it.  Finally we got to some opener areas with bits of meadow beside the creek but it felt like people were camped with their machines just about everywhere.  They were friendly and the kids were excited to pet the ponies – but I was feeling seriously out of place.   At least the vehicles were all on one side of the creek.  I found a trail on the other side of the creek – and passed a neatly placed toilet seat on legs, with a fancy toilet paper holder.  The campers were using it like an outhouse, with no bucket underneath, only 5’ from the creek where I was planning to get my drinking water.  Ugh! 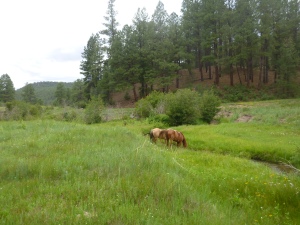 We’d only made 7 miles of progress when I found a wide grassy meadow and chose the most secluded spot I could find to pitch camp.  The ponies were hungry and I had no idea what lay ahead.  This would work.  Better to err on the side of caution.  It wasn’t a quiet night, and the next morning we set out to see what else the forest had to offer.  I had it in mind to find the San Antonio hot springs, even though they were in a “day use only” area.  I wanted to find a water source that wasn’t contaminated by human feces.  I really wanted to get away from the ATVs and hoards of people.  The ranger from the day before came by and was more encouraging, filling up my water bottles and saying that she’d checked out the blog.  She asked about my intended route.  I lied. 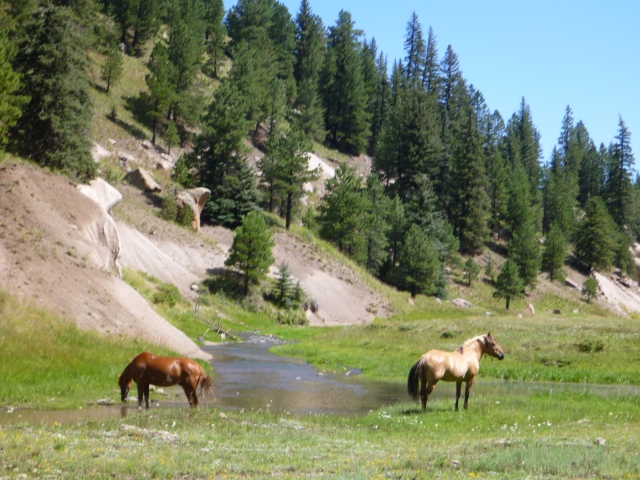 I came to the entrance to the road up to the hot springs.  Cattle Guard.  There was a sign “Don’t Block the Gate” and an SUV blocking the gate.  There was a metal fence post placed so that the gate only swung one way.  I spent 10 furious minutes getting rid of that impediment so that I could squeeze the ponies through and access the road.  I started up – and up – and up.  The cell ‘phone worked briefly and I called my dad and my aunt.  An SUV full of Texans came by and handed me a Taco Bell burrito.  Then a woman in a truck stopped and handed me a very helpful hand drawn map from the ranger.  It showed a road that had been taken off of the Forest Service map (but still existed on my DeLorme Atlas map ;-)!)  It also provided plausible deniability in terms of access to the place I hoped to camp.  Things were looking up.  I deliberately rode right past the entrance to the hot springs and headed up canyon.  We’d covered 17 miles of rocky roads and the ponies were ready for a rest.

The ride was worth it!  I untacked the ponies and they immediately started grazing.  Jesse stood with all four feet in the cold water of the creek and ate the clover that grew on the banks.  I pitched camp next to a fire ring at the edge of the forest and got myself organized just before dark.  I heard a whistle and a couple I’d met earlier were hiking up the canyon on their way back from the Hot Springs.  They stopped to chat and wound up camping nearby.  One was an organic farmer and the other worked on wetlands restoration – it was lovely sharing the commons and a campfire with like-minded companions under the stars, listening to the sounds of the night. 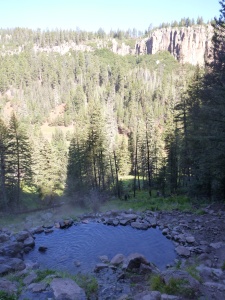 In the morning I was awakened by a strange noise.  I peeked out of my tent to see a very large bull slowly grazing his way down to the creek, followed by a second, then a third.  They passed within 5′ of my tent and ignored me completely.  Once they’d gone by I got up and let Jesse off of the tether rope – Finehorn’s turn.  The cows came by with their calves after breakfast and then I headed up to the San Antonio hot springs.  Ahhhhhhh!  Blessings on the Commons.  Sunday it poured rain all day and I finished the book I was reading (Housekeeping by Marilynne Robinson – highly recommended) while the ponies rested and ate their fill.  Monday morning we were ready to ride on in search of new adventures…

6 Responses to I didn’t disappear forever…