We’ve been posting a lot of journal entries and photos from the beginning of the trip – and realized that a bit of a peek into the here and now might be a good idea – and hopefully interesting.  This morning finds us sipping tea in a large round arena – perhaps 70′ in diameter – solidly built of cinder blocks below and a metal panels above – the ground is sand, which was lovely for our tent and for the ponies legs – and we really appreciated the wind and noise block it provided.  Our hosts are Mexican, with beautiful horses of their own – and although they warned us that the neighbor might play loud music for a few hours last night, we didn’t hear a thing!

The nights are cold, but our tent and sleeping bags keep us toasty when we camp, and often we have been invited into people’s homes (and fed and showered and laundered and entertained into the bargain).  Last night hot burgers and cold pepsi were delivered to our tent – and a bale of hay for the ponies.  Today we press on to Corcoran – where we hope to do a bit of a re-supply, as we’re out of porridge and horse food, and very low on denatured alcohol…

We are growing more accustomed to this strange and haunted valley – the immensity and gridness of it all.  We are moving slowly, 5-7 miles a day of late, because Jesse James has a strained muscle in his left hip and we’re not asking him to carry anything or anyone while he has time to heal.  We count it a great blessing when someone is willing to transport gear for the day, because that means Sea can ride Cowgirl and pony Jesse, rather than trudge down the side of the road, leading them both. 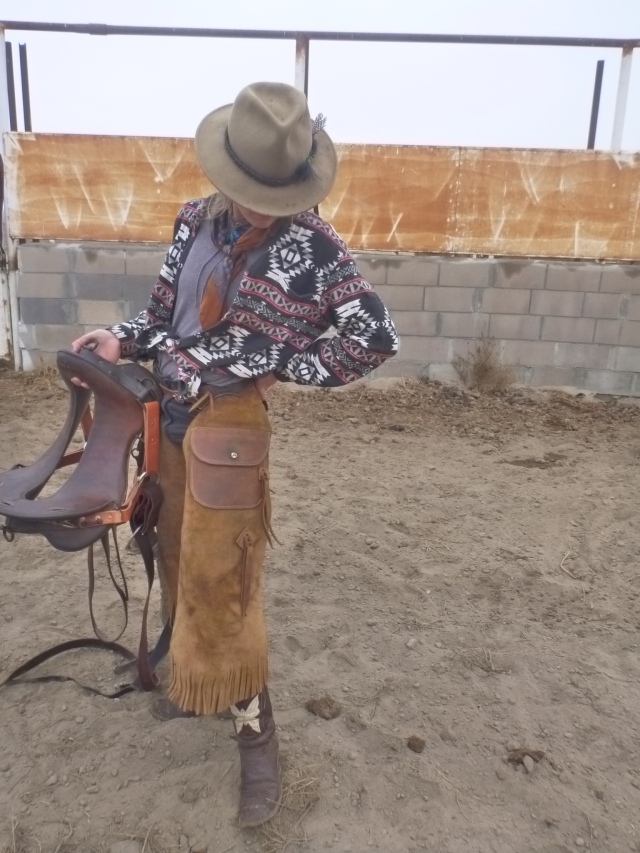 Gryph was given a spectacular and well-worn pair of chinks two days ago, a blessing for her chafed knees (and they look So cool!).  We made a tack change for Cowgirl, packing her on an old (1904) McClellan cavalry saddle rather than a sawbuck – so we’re back on the learning curve re: packing, but at least we have the principles down and we only had to repack once yesterday – before we’d even left the yard.  We’d toyed with the idea of gradually transferring over to all McClellans, until Gryph put it on Finehorn and sat in it.  The slot down the center of the saddle (to allow air and lack of pressure on the horses’ spine) seems to have been specifically designed for men – which makes sense as there were no women in the cavalry in 1904 – we have yet to meet a man who considers it a problem (or a woman who considers it ridable!)

It is strange to realize that so many of you are busy preparing for Christmas – and to wonder where that day will find the 5 of us.  Occasionally we pass some reminder, a huge Santa hat on a John Deere tractor – or Christmas lights decorating a house we see across the fields.  Nothing to do with us hobos – who ride along each day wondering if there will be room for us to stop for the night and throw down our bedrolls in a barn (we don’t even knock at the Inn ;-).

Now that we are finally getting the blog up and running, we find it a great encouragement when someone decides to “follow” us – and/or makes a comment (which lets us know that we’re being read!)  Blessings on you all  — as we have been incredibly blessed thus far on this journey, by the love of friends and family and the kindness of the wonderful people we have met and are meeting along the way.  Our hearts are filled with gratitude.

Sea G Rhydr and her trusty steeds, Jesse James and Finehorn - embarking on a grand adventure to cross America.
View all posts by Sea G Rhydr →
This entry was posted in Uncategorized and tagged bedrolls in barn, blessed by srangers, chinks, gratitude, haunted valley, hobos, McClellan, mexican hospitality, round arena. Bookmark the permalink.

8 Responses to the present moment