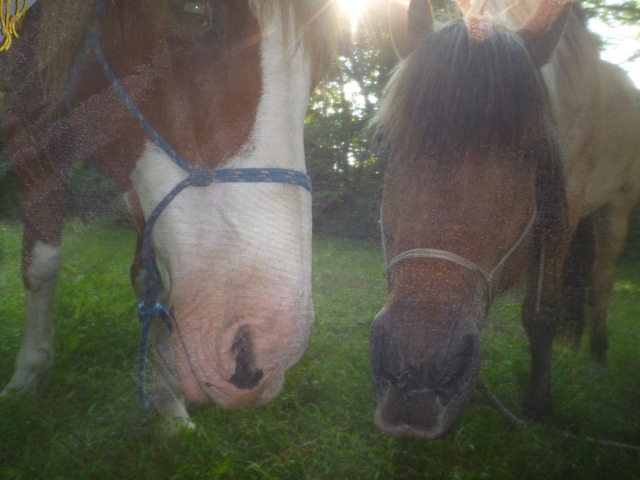 Back on the road again and I’ve got to say it feels really good – despite the heat which is ranging between boggling and stunning (not to mention the humidity).  Lucy and Amber rode out with me yesterday for a couple of hours and showed me great farm roads and short cuts.  The ponies slowed down a bit once their company left, but still went willingly in the direction of further.  On Thursday, when I finally brought Jesse’s Bosal (the bridle I ride him in) out to the pasture to catch him (instead of his halter, which is day off garb) he was so excited that he pretty much put it on himself, thrusting his nose into the Bosal part and moving his head to make it as easy and quick as possible for me to slide it up over his ears.  I laughed at him and he gave me “nose kisses” (our morning ritual and one of the “mood gauges” I use with him.)  I guess he was ready to hit the trail again!

I’ve been seeing the Amish buggies around town while running errands, but this was the first time for the ponies.  Jesse, even after two days of being passed by them on the road, still goes into flight mode.  Finehorn is positively fascinated; I think she wants one!  I’ve stopped at noon the past two days, partly to protect the ponies and let them build back up gradually after the long hiatus and partly because my head is swimming in this heat.  Last night I camped by historic Alexander Springs and slept in my hammock for the first time since last summer in New Mexico.  It felt really good and the moon was amazing.  I was 30′ from a road and it felt a bit like sleeping in public, but nobody bothered me.  Alexander Springs is a 4’x6′ cement box full of algae and about 18″ of water.  There’s a PVC pipe sticking out of the side but no water is flowing.  The water level was too low for the ponies to reach so last night the owner of the property and I carried hose water to them in an ice chest.  There’s one really big frog in residence and a bunch of funny tadpoles that shoot up to the surface, flip and descend.  They bear a strange resemblance to raindrops, but upside down, falling up to bounce off the surface, and existing at the next level of density.  I haven’t taken photos of the Amish according to their preference.  I didn’t take photos of the spring because my brain was too cooked to cognate.

Tonight I’m in my tent in a field.  The roads are quite close and have plenty of traffic (what’s up with those blatty mufflers boys put on their trucks?) but I’m shielded by a scrim of trees and it feels private.  Water this afternoon came in a Tupperware tub – good thing the ponies are adaptable!  The ponies are really loving having me back out with them again, grazing around the tent and generally being sweethearts.  The big excitement today came in the form of deer.  The first one was down in a dry creek that ran beside the road.  As we passed by it startled and ran clattering invisibly up the rocky bed and Jesse was so scared he almost threw himself in front of a truck.  Lucky for us that local drivers are very horse savvy (due to the Amish living among them).  A mile or two later a wee fawn who’d been left hiding in the bar ditch suddenly sprang up and ran across the road right under Jesse’s nose.  It was very young, spotted and gangly and I hope it found it’s mum. 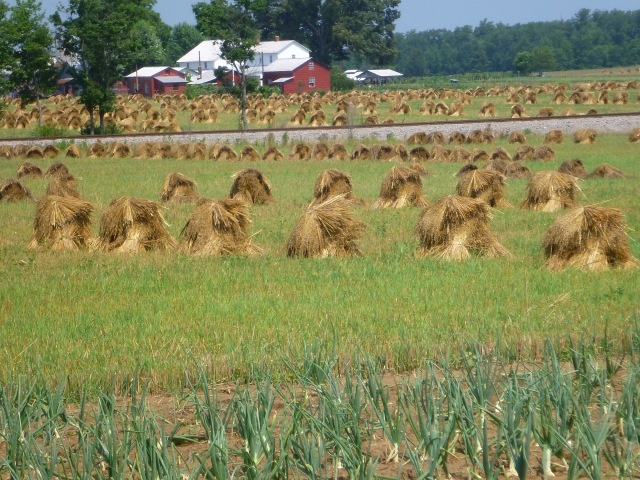 Yesterday we covered 8.5 miles.  Today it was 10.5 and Jesse’s back is still doing well.  If we can make 15 tomorrow we can camp by a lake at a boat ramp but we’ll just have to see how it goes.  I’m 107 miles from the KY border tonight.  I’d really thought I’d be in Ohio by my birthday on 2.July.  Now I’m to the point of hoping to be riding into Kentucky on that date.  It’s entirely up to the ponies and how they’re doing but that’s my goal.  (It’s good to have goals, so long as I don’t let them overtake common sense and care of the herd.)

Sea G Rhydr and her trusty steeds, Jesse James and Finehorn - embarking on a grand adventure to cross America.
View all posts by Sea G Rhydr →
This entry was posted in Uncategorized and tagged Alexander Springs, Amish, back in the saddle, blatty mufflers, hammock, heat and humidity, Meriwood Farm, spooked by deer, tadpoles like raindrops, tenting with horses. Bookmark the permalink.

3 Responses to Onward into Summer