maps are only paper

A storm is blowing in and I am keen to return to my haven so this will be brief!  Wednesday I started out on Hwy 64/15 heading east from Olive Hill, TN towards Waynesboro.  I had been forwarned that there was construction ahead but the detour added many miles and the consensus was that I wouldn’t have too much trouble finding a way through.  Well…  it was a Lot of construction and between the gravel underfoot and the trucks zooming by and the men making comments and the places where obstacles to horse travel came one after the other I found a side road and escaped to the detour. 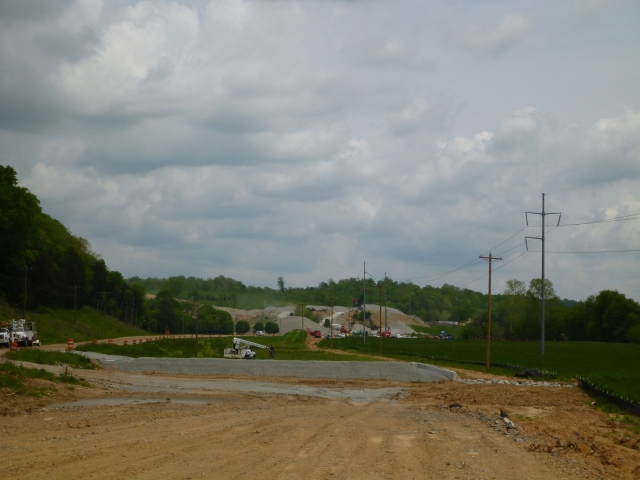 The detour turned out to be very nice, but the road surface was basically gravel cemented together and pressed flat, a great surface for cars but still not lovely for hooves.  Somewhere along the way the map and the road weren’t particularly in agreement, but according to the compass we were heading in the correct direction and the road had turned to a 4WD track through the woods, really beautiful and the ponies were happy and we went along for a pleasant several miles before reaching a T in the forest.  I went up the left branch (following the compass) but it petered out.  The right branch ended up a hill at an old overgrown cemetary.

Backtracking until I could hear the road and see a few houses led us to another trail which pretty much put us in and along the creek for the last stretch out to the road.  It was 4:30 by now and I saw a man working in his garden dressed in nice trousers and a pressed shirt and a straw hat.  I stopped to find out where I was and somehow it was exactly where I’d hoped to come out on the map, except for the bit about the road on the map actually being a river.  I was asked by my anonymous host not to post photos of his property where the ponies enjoyed grazing a sweet meadow and I camped behind an old hay barn.  He said, “I’ve spent most of my life trying to remain obscure.”  (It’s the word *most* in that sentence that I find intruiging!)

The next morning the ponies were still weary and a bit foot sore from the previous day’s ride but I felt like we needed to move on before the storm came.  Heading back to reconnect with 64/15 on the east side of Waynesboro (post-construction) I saw a pasture with beautiful healthy looking cows, beautiful healthy looking horses on the other side of the road and “Gilbert’s Furniture” on a big warehouse with a ‘phone number.  I called and the owner emerged and agreed to let the ponies graze with his cows for a few days.

I was welcome to camp out in the hay barn, but I’d been offered the use of a lovely cabin on the Tennessee River so I made several ‘phone calls, managed to arrange a ride, was invited in for spaghetti (yum!) while I waited for transport.  Turns out that the woman who was coming to pick me up was related by marriage to my hosts!  We headed for the cabin via the grocery store, yours truly ecstatic over the prospect of three days of solitude – and found the road blocked by water!  This was left over from last weekend’s rain storm – and didn’t bode well for the road’s passability (even in a truck!) after the impending several more days of rain.  We turned back, the wonderful woman who was driving me working on a plan B en route back to her place – and by the time we returned arrangements were in place for me to stay at their neighbor’s empty man cave cement block cabin in the woods.  Which is turning out to be absolutely perfect!

I came up the hill today on a borrowed ATV to get on line quickly before disappearing for a few days.  The cell ‘phone doesn’t work down there either and I’m OK with that!  I’ve even got a funny little “loaner dog” named Snooper to keep me company!

4 Responses to maps are only paper