Caring for the Herd 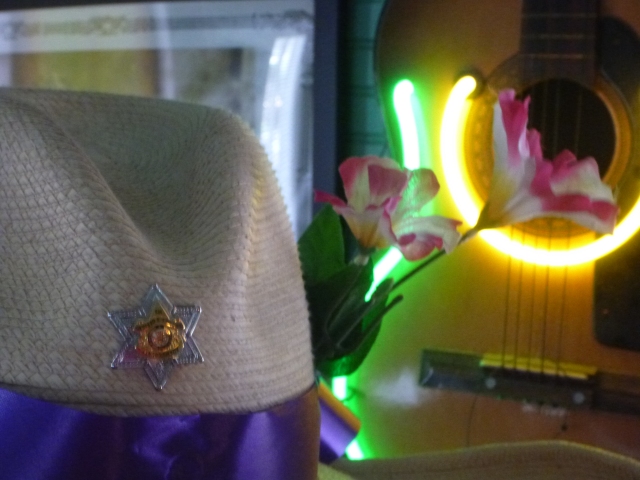 My biggest concern about Katie coming to join the Free Range Rodeo was something that I had no control over, couldn’t anticipate and couldn’t discuss with those who would be most directly affected.  It was herd business and thus out of my domain.  Jesse James and Saint Finehorn have become a very tight knit unit over the past year and a half.  People have commented on how well they work together, sometimes seeming to move as one being.  Before this ride Mr. James was a bit of a loner.  He was at the bottom of the pecking order in an all gelding herd and generally hung out on the fringes.  He seemed relieved when I’d take him out for a ride by himself.  He’s gained a lot of self-confidence on this Journey and takes his job of herd protector (including Gryph and I in the herd) very seriously.  Finehorn has her own opinions, having had two close horse friends leave the herd during the Journey and absolutely refusing to make friends with  Luna Jack and allow her to truly join the herd – creating a dangerous situation for all of us. 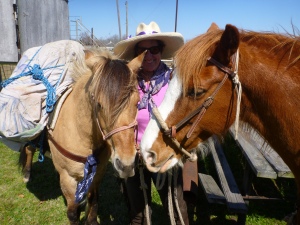 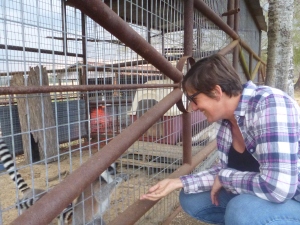 Trust and harmony among the equines is an essential part of the Journey.  I was concerned about how Katie’s mount would mesh with Jesse and Finehorn.  I was especially concerned about Mr. James if her animal turned out to be a dominant male and decided to “steal” Finehorn and drive Jesse back to the fringes.  I need Jesse to be strong and confident and fully on board with this Journey, but in the context of herd dynamics I have no way to protect him.  Sir Walter the Red has turned out to be a brilliant addition to the herd on many levels.  He’s rock solid in traffic and willing to lead when the trucks are zooming by, allowing Jesse James to follow his lead and feel safer along the road.  On the other hand, Walter is a bit of a chicken when it comes to water and boggy places and is very happy to allow Jesse to go ahead and make sure everything is safe (at which point he follows willingly).  There has been no aggression between any of the three.  The initial introduction was full of showing off and prancing around, but no pinned ears or threats.  I knew we were in great shape on this level a few mornings ago when Jesse came over as close as his tether allowed and laid himself out full length, mouth hanging open, totally relaxed and took a long nap in the sunshine – trusting Sir Walter to stand watch over the herd.  Lovely!

Towards the end of February it was becoming obvious that the ponies and I were all feeling the effects of 16+ months on the trail.  Energy and enthusiasm were waning.  Our joints were getting stiff and the ponies’ coats and eyes were starting to look dull (mine too probably, but I don’t think anybody was looking).  The ponies were loving the good green grass that was growing in abundance, often refusing hay when it was offered, but they were losing weight because the grass was so full of water that they simply couldn’t eat enough of it to get the calories they needed.  I’m getting plenty of calories, but it’s hard to get the fresh fruits and veggies my body needs while on the road.  I knew we all needed vitamins but figuring out what we needed and where to get it seemed beyond me.  I mentioned this to a friend in Oregon and she said that there was a great company just down the road from her that made horse vitamins and she’d see what they recommended.  Well, they went a lot further than that!  They offered to provide vitamins for the ponies, 5# at a time, for the duration of the Journey!  The area I’m in right now is naturally low in selenium, which means that they can’t get enough of it by eating the local grass and hay. The new supplement provides that along with a bunch of other good stuff and over the past two weeks I’ve been seeing a steady improvement, including a quicker pace and a better attitude.  A huge thank you to Animal Health Solutions!   www.animalhealthsolutionsinc.com 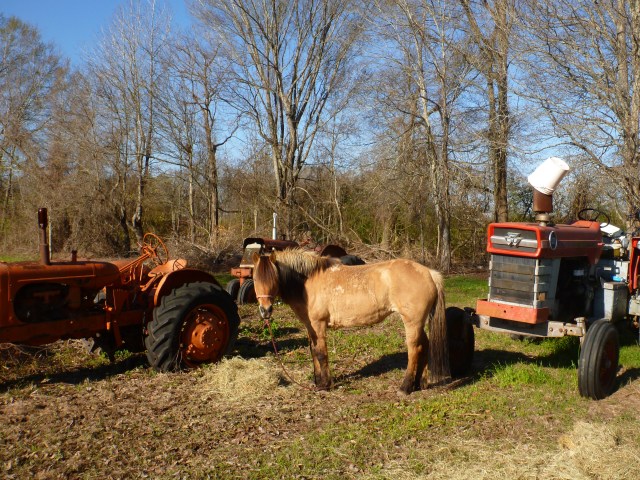 The very next day I was speaking with a friend in California and the company she gets her (human) vitamins from, K-Pax, had sent her an extra bottle of vitamins free that month so she passed it along to me and sure enough, I’m feeling better with some vitamins as well.  I’d resisted bringing vitamins along because it’s one more thing to carry and adds weight – well, chalk that one up to experience as well.  Live and learn or you don’t live long.  And I’m so grateful to have great friends who find ways to help in very practical and life sustaining ways!  Last winter in California a vet referred to the herd as “Endurance Horses” and I thought that was funny.  I think of endurance horses as going 100 miles in a day, moving at speed over rough terrain and sweating a lot.  I’m just now starting to realize the endurance it takes to cover 10-15 miles a day, at a walk, carrying weight, day after day, week after week, month after month as this Journey adds up to an eventual two + years.

At the  beginning of this Journey I made the decision not to shoe the ponies.  I don’t have the skills to shoe them myself, the equipment to do so is heavy, finding a good farrier along the way is sometimes difficult, a bad job shoeing can lame a horse and cause problems that take months and months to correct, a shoe falling off deep in the wilderness can be a serious problem for a horse accustomed to wearing them, shoes wear out quickly on a long ride and generally need to be replaced monthly, creating problems with multiple nail holes and a weakening of the hoof wall – besides which, shoeing is expensive.  I tried the Easy Boot Glove, but Jesse James hated them, they fell off going up hill, the neoprene wore out within two weeks (and cost $25 per boot to replace) and they caused sores on the coronet band (where the hoof attaches to the hairy part of the leg) – and I’d had them fit by a professional!  On the advice of a friend I contacted Kirt Lander at Renegade Boots out in Kingman, AZ.  He said that if I bought the first set per horse he’d sponsor me the rest of the ride because he didn’t think I’d go through very many boots.  He then talked me through the basics of transitioning my horses to barefoot and suggested two books to read.  I followed his instructions, using the boots only when the ponies were actually having trouble with the terrain (usually the large sharp gravel used by the highway department and the forest service) and riding them barefoot the rest of the time.  Like people who go barefoot all the time, the ponies hooves grew harder and stronger and the last time we needed the boots was a day and a half back in New Mexico.  I’d used the same boots the entire trip up to that point and it was only in the last month that I even had to replace the velcro straps (an extra set of which arrive with the boots).  By the time we’d crossed Texas and Oklahoma (and then even more of Texas) I decided to cut the weight and leave them behind.

Since we’ve transitioned from dry to wet Jesse has started acting a little tender when we’ve been on rough surfaces.  A farrier said that he was getting a bit of seedy toe which was partly nutritional and I learned from local horse people that in the spring time many horses hooves get soft and then when the weather goes dry again the fall apart.  I called Renegade and asked what they suggested.  They responded by sending out a free set of boots for Mr. James and I’ll start using them again on the rough bits until things dry out again.  Finehorn, on the other hoof, is thriving barefoot.  Her hooves are practically perfect and she really only needs a touch of rasp work once or twice a year!  Fine Horn indeed.  It seems a strange business plan to create a product that helps people no longer need your product but the Renegade hoof boots rock (Jesse James loves them too!) and I’m really glad to have them when I do need them.  Thank you to Kirt and Gina, not only for providing hoof boots for my ride, but also for working to create and perfect a hoof boot that’s quick and easy to put on and take off and is comfortable and secure for the horse.  (The sort of endurance horses that win the Tevis Cup wear them too!)  www.renegadehorseboot.com 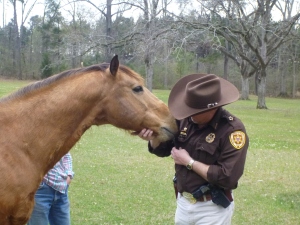 I was asked last night why I don’t get Walmart to sponsor me and I about choked.  I’ve got mixed feelings about any sort of corporate sponsorship and have been feeling really blessed that my Journey has been truly grass roots and free of strings.  I’ve been so encouraged by the help I’ve received every step of the way from the people I’ve met along the route and I’m living proof that you don’t have to be rich and famous to live your dream.  At the same time I’m feeling blessed to have the support of these two American companies – small enough that when I call on the ‘phone I can talk to the owner and ask questions and get useful answers – and working to provide the best product they can make.

Friday afternoon we got a ride across the Mississippi River from the Natchez, Mississippi Sheriff’s Department.  We’d called about arranging an escort and they said that the bridge was too dangerous and they’d feel better bringing us across in a trailer.  The welcome didn’t stop there however.  The herd have had three days rest in a beautiful pasture at the old stockyards and accommodations were arranged for the humans at the Shantybellum – a funky sweet little cottage half a block from the river and super comfortable and fun.  Saturday I was treated to a private tour of some of the classic antebellum mansions around town and this afternoon we not only got to meet the Sheriff’s Keiger Mustang, we also had an opportunity to get up close and personal with two lemurs, a camel, a zebra and a zedonk!  If you’ve never heard a happy camel, there’s a brief video up on facebook!  Natchez is a wonderful place and it’s been a real treat to be shown around and get to know it a little bit.  This is the weekend of the Pilgrimage, the busiest weekend of the year, organized by the two garden clubs and featuring the history and beauty of the city.  What a perfect time to ride through town!  So one more huge thank you – this one to the City of Natchez, Mississippi – and especially the Sheriff and his incredible team! 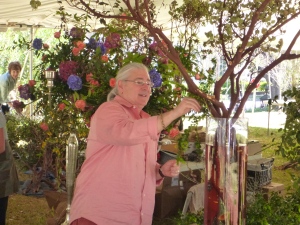 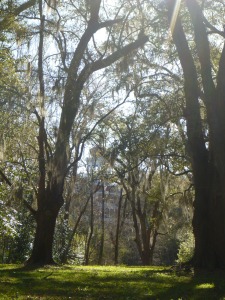 1 Response to Caring for the Herd