Not long after he received his driver’s license my Dad had a fender bender while driving his dad’s car.  Then another.  After the third such accident, his father was debriefing him and said “Three Strikes and you’re Out.”  My Dad’s heart sank, thinking he was about to be banned from driving (and probably feeling like that was perhaps understandable under the circumstances) when his dad smiled and said “Out of Trouble.  Lesson learned.” 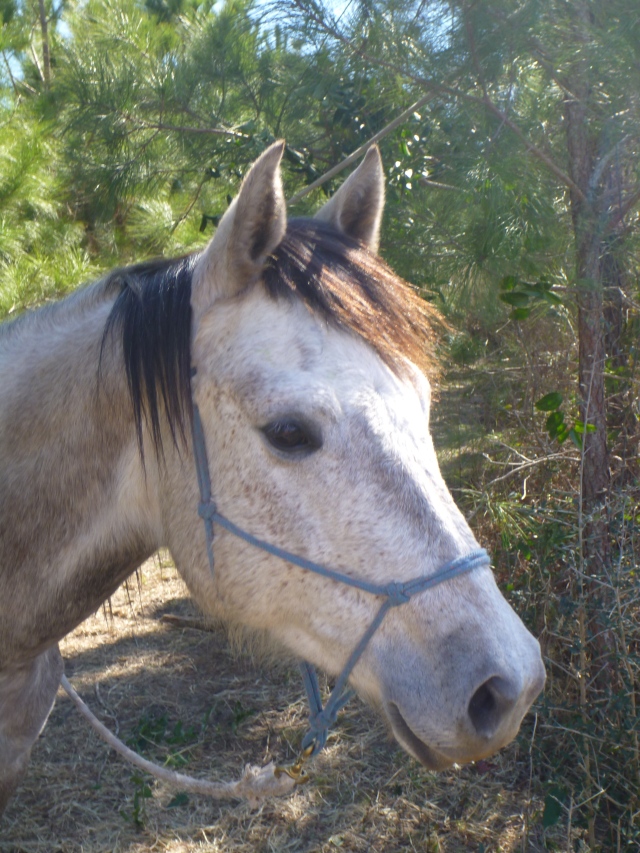 I am sitting in a tin roof shack, listening to the rain falling, being very glad for a roof today and hoping that the same theory applies to me (and Luna Jack).  I hadn’t planned to “winter over”, choosing instead to take the Southernmost route that made sense (while staying North of swamps and gators) and ride on through as I did last winter.  Well, I haven’t done much “riding on” during the past 8 weeks.  First, there was Luna Jack’s sprained ankle, which coincided nicely with the holiday season.  Then there were 6 days of riding, ended by my fall (which could have been much worse) and recovery (back to “normal” thank you!).  Then, a day and a half of really lovely riding, in perfect weather, through beautiful rolling piney hills.  This part of East Texas is beautiful, easy riding on good footing (white sand and red clay predominate) and the graze in the bar ditches is plentiful for this time of year.  I’m seeing Magnolia trees in bloom and Narcissus and have been told that the bluebonnets will be up soon (early! usually they’re in full bloom around Easter.) 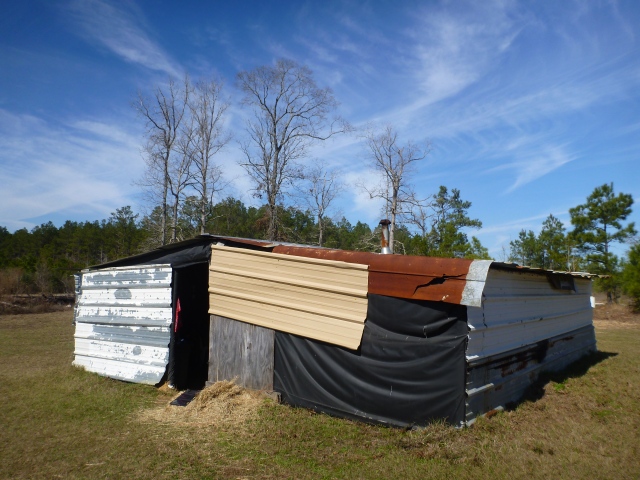 Last friday in the early afternoon I was riding along, singing to the ponies, happy in the sunshine, when Luna started fidgeting a bit.  I didn’t catch it quickly enough, but her pack was starting to slip sideways.  Suddenly she took off up the road.  I dropped the rope (no real choice at that point) and concentrated on keeping the other two ponies under control.  I gathered up the gear she’d strewn as she went, brought Jesse James and Finehorn up to the point where I’d last seen evidence of her – two saddle pads escaped from under the McClellan – but she’d totally disappeared.  I called 911, thinking that if she were on the road somewhere she was a danger to herself and others.  The woman on the other end of the line said she’d have animal control call me back.  I was at a “4-Corners” intersection, so at least it was easy to report my location.  Several men in trucks offered to drive the 3 possible directions of disappearance while I started looking for tracks.  Obviously my tracking skills aren’t up to par. 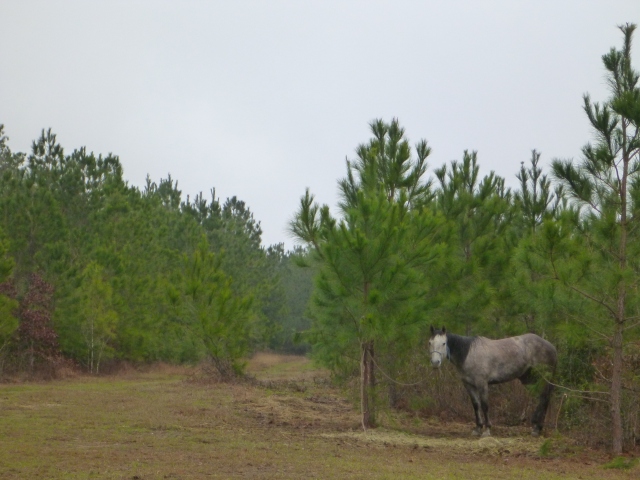 An older black gentleman stopped, said that he’d seen me earlier, had in fact passed me twice, that this was his property and kindly offered me the use of his “camp” there on the corner and gave me an idea of the lay of the land to aid me in my search.  I brought Jesse and Finehorn in away from the road and onto the grass, and realized that it had been 40 minutes since I’d called 911.  My brother-in-law found the number for the Polk County Sheriff’s Department and I called them. They had an officer en route.  I kept looking.  Finehorn and Mr. James seemed utterly unconcerned with their missing herd-mate.  The sheriff showed up after an hour or so, a horsewoman herself, she was calm and helped me look, but informed me that there really weren’t resources for this sort of thing.  No trackers, the only dogs were prison dogs (not trained for this sort of thing) and since it wasn’t Some-Body (but only a horse) a Search and Rescue operation was out of the question.  She did run me up to the store for a couple of gallons of water (this is a dry camp with no electricity – tho it does have an outhouse!) and gave me her ‘phone number before she had to go back to her life. 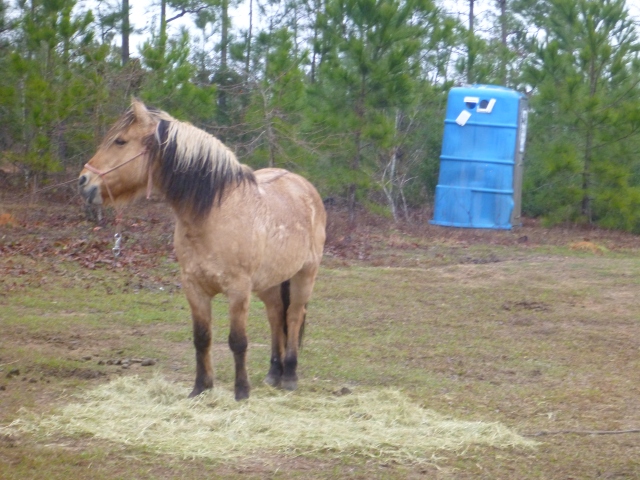 The brain storm that found Luna Jack was that the other two will call for one another insistantly and loudly when separated.  I left Finehorn tied in camp and led Jesse James down in the direction that seemed most likely.  Sure enough, the whinneying started and soon enough I heard a third voice: the missing baby.  She was on the inside of the fence down close to where she’d originally bolted (the last time she’d seen the rest of us) and so Very glad to see us.  Leading her back, she touched my back or shoulder with her nose every three strides or so, very contrite and in need of reassurance.  Unfortunately, she’d lost one of the two big pack bags somewhere in the woods.  It contained all of the clothes I wasn’t wearing, my Thermarest mattress and my new DeLorme maps for Louisiana and Mississippi.  By this point it was getting dark and I got the ponies settled as best I could for the night and moved into the shack.  The sheriff returned (bless her 1000 times for this!) with her two little girls, two bales of hay, a bucket of feed and two 15 gallon jugs of water for the ponies.  So far above and beyond the call of duty! 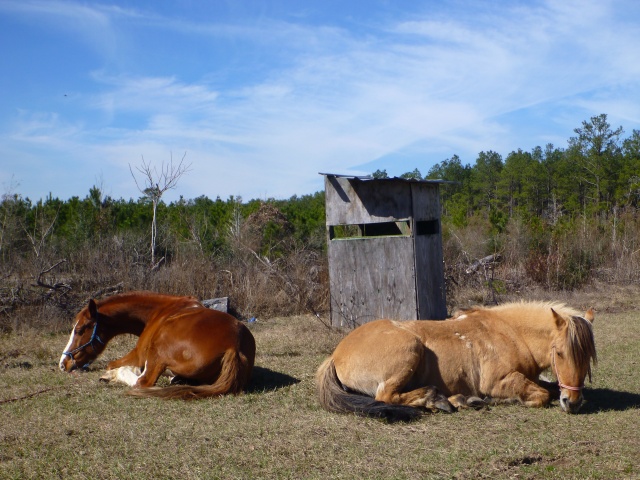 I spent the weekend looking for the missing bag (big and bright yellow – how hard can this be to find?) in dense pine forests, creeping pricker vines, ATV roads the hunters use and wee trails laid out by the deer.  One morning I was woken by a hunter who asked “do you live here?”  (Really!?)  and when I heard the shots of pig hunters in the woods I decided to suspend the search until they’d finished.  Monday morning I searched again, in the rain, and then I moved on to plan B.  I called Cascade Designs/MSR out in Seattle.  This is the company that makes all of my dry bags, Thermarest, my tent, my fuel canister – honestly, most of my gear.  The young man who answered the ‘phone was super helpful and efficient and replacement gear (functional seconds, at an Amazingly reduced price) should be here today.  Huge thanks to Cascade – and truly brilliant customer service! 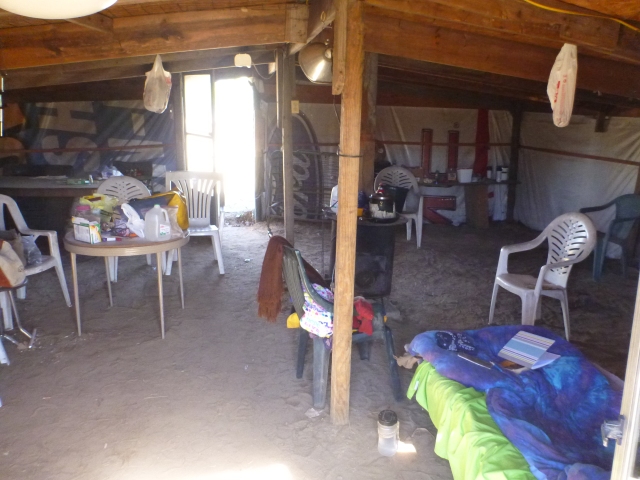 Then I called DeLorme about the missing maps.  A bit more of a process, but the man on the ‘phone actually undertook to write the request e-mail for me (since my laptop was out of juice) and the Atlas and Gazetteers for Louisiana and Mississippi should be arriving (gratis) here today as well.  My finances at the moment are not such that I even Could have paid full price to replace all that was lost – so grateful for the assistance.  Which has also manifested locally as the loggers driving their big trucks up and down the road have adopted me and made sure I’m ok and have what I need for the time that I’m here.  A man stopped yesterday afternoon saying that he’d done a lot of travelling and people have always helped him out and now he’s in a position to do the same – what do I need?  Turns out his wife and grandmother are both seamstresses – so he took the shredded Wizard’s Cloak (manty) with him to see what they can do – saving me over 12 feet of hand sewing!  (I was also offered $300 for Mr.James by a local gentleman, but I declined… ) 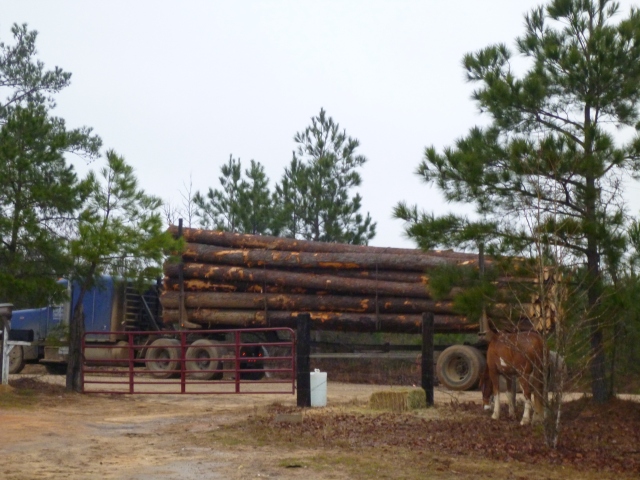 Tomorrow, assuming UPS and the USPS do their jobs today, I will ride on towards Colmesneil, TX – 23 miles from here – where I’ll visit the Post Office and hopefully find a few boxes with some “replacement” clothing.  4-5 days ride from there will bring me to the Louisiana border.  I’m really hoping that my unplanned winter lay-up is at an end.  The ponies and I are well rested.  It’s been in the 70s this week and really doesn’t feel like winter.  The last two lay-ups have been “pony heaven” – this one has been boring and not to their liking at all.  They’re not out in lovely pasture, but tethered to trees.  Water is scarce and requires a ride down the road to a shrinking puddle or a difficult-to-access creek.  They’ve had plenty of hay and they’re not suffering but it’s not quite the vacation they’ve come to expect when we stop.  Perhaps they’ll draw a lesson from that in terms of steady behaviour?  (Who can truly fathom the mind of a horse?) 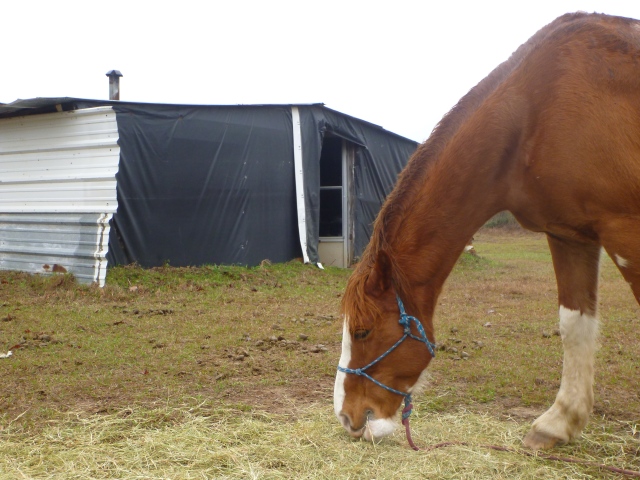 One thing I have been thinking about is that Luna Jack still doesn’t feel herself quite a part of the herd.  The other two (witness their lack of calling when she was lost) haven’t taken her in and accepted her.  I’ve realized that I have no clue how to rectify that situation (team building exercises for equines?) but what I can do is work to strengthen Luna’s bond to me so that at the very least she thinks of me as her “security blanket”.  The first month of the Journey when Finehorn was learning to be a pack pony we had several instances like this, but she emphatically did not want to get out of sight of the herd, which was really helpful.  Life is a learning curve and Long Rides no exception – it doesn’t help to kick myself (or the ponies) for not having everything working perfectly smoothly 16 months into the Journey.  Time to pick up the pieces, saddle up and ride on. 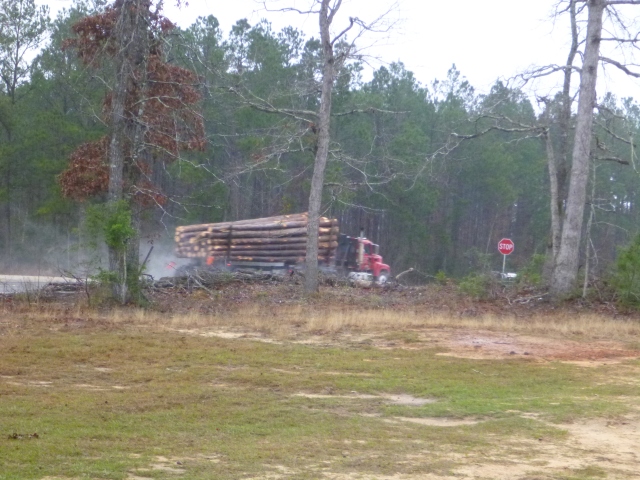