This is where I live today! 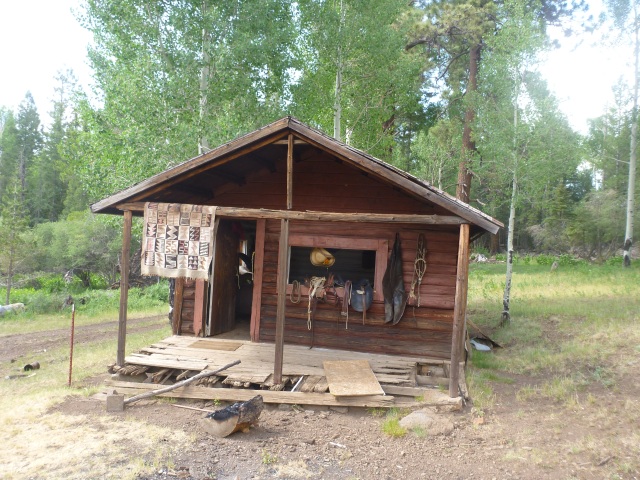 “this cabin, and the piped box spring behind it weren’t on my map.  i stayed two days here, including my birthday – sharing space with an incredibly brash mama chipmunk who ran in and ‘tagged’ my head every time i laid me down to rest”

The past 3 weeks have been among the most wonderful of the Journey thus far.  The ponies are in good form and doing well.  I have been riding through country that makes my heart sing with its beauty and grandeur.  Starting out from Northern California last October, one of my biggest fears was of riding in the rain.  After 8 months of deserts and drought I am finding that the rain in this 9th month is a blessing and really not all that much of a problem (tho’ i’m sure that “too much of a good thing” could eventually apply to the rain as well!)  Gryph just took off to return to Boulder after a week’s visit which delighted us all – Saint Finehorn, Mr. James and I will miss her even as we bless her on her Way.  The ponies are currently at the Reserve, NM fairgrounds waiting for me to finish my “office chores”at the coffeeshop – and then we’re heading back up the canyon and onward. 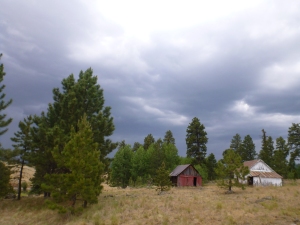 “one day as i was riding, i saw a storm rapidly approaching – as i came around a bend this wee abandoned sheep-herder shack appeared.  it came fully equipt with a fenced in pasture with a spring for the ponies.  got them unloaded and turned out just in time.  lovely night listening to the rain and left with dry gear in the morning… ”

There is so much to show and tell that I scarcely know where to begin.  I’ve seen not only elk and antelope and coyotes and wild turkeys and chipmunks and squirrels and mule deer and hawks and crawdads and frogs and a wide variety of lizards and an Enormous great blue heron, I’ve also been lucky enough to see a Mexican grey wolf, a ring-tail cat and 4 peccaries!  I was introduced to my first “water dog” (an algae colored salamander stage with dragon “ears” that comes to the surface and grabs an air bubble so it can breathe under water!  And then there were the Vinegaroons!  My camera hasn’t been quite so lucky as I have with the wild animals.   Sometimes I was just too caught in the moment to even think about a photograph until the spell was broken.  Other times, by the time I had the camera in hand and pointed in the right direction it was too late!  For quite some time I thought that the reason I wasn’t seeing much wildlife was because of the ponies, but it turns out that Vehicles are the limiting factor.  It’s hard to find places where Vehicles aren’t allowed to roam, but as soon as I started riding in those places I found the wildlife roaming as well.  I wonder if all the people driving around in the National Forests have any idea what they’re missing in terms of sounds and smells and actual encounters!

As I’ve ridden through the Apache-Sitgreaves National Forest I’ve had a glorious series of camps.  I’ve tented in remote meadows and thrown down my bedroll in abandoned bunkhouses, I’ve slept between soft sheets in comfortable houses and slung my hammock between trees beside a stream that burbled just on the edges of audible.  I’ve reveled in my solitude and enjoyed the company of wonderful people.  I’ve been thinking a lot about expectations and gratitude.  It’s so easy to grow used to things and start to take them for granted; maybe even to assume that they’re a “right”.  It’s nice to be invited in to a climate controlled house and offered a shower and a home cooked meal.  But if I thought that I “needed” that to be comfortable I’d have missed the sight of elk grazing in the morning mist; I’d have missed the night I heard wild wolves singing for the first time in my life; I’d have missed the sound of rain pounding my tent as I curled up inside, safe and dry. 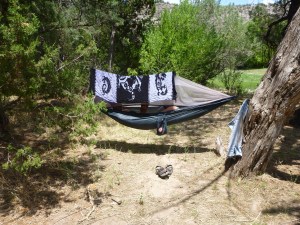 “after 10 days in a row of riding, often over challenging terrain, the ponies weren’t the only ones in need of a rest.”

The ponies are thriving on the available forage.  I’ve started letting them off of their tethers in the afternoons and thus far they’ve not abandoned me.  At night, assuming we’re in a safe space, I’ll tether one of them and let the other roam free. 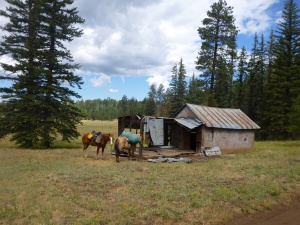 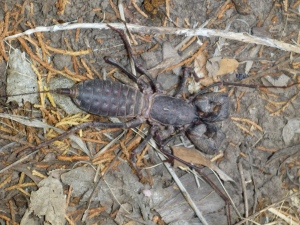 “that creature on the right?  that’s a vinegaroon!  they’re in the arachnid family – and that particular specimen is close to 4″ long – the good news is that they don’t eat people… ” 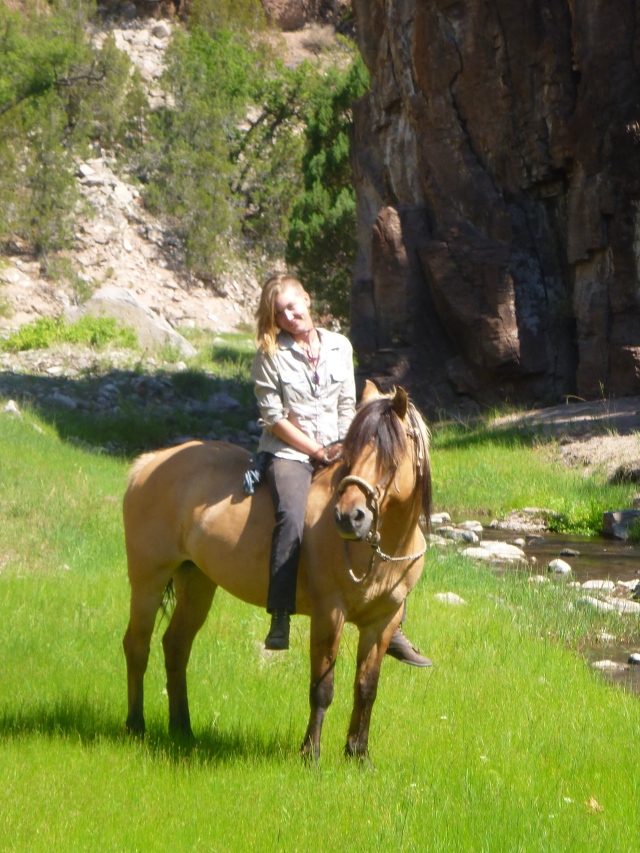 4 Responses to This is where I live today!