where i’m going is on fire…

I rode out as planned on Thursday morning, a bit later than would have been ideal – but we did it.  Finehorn’s pack weight is down to 102#, they both wore their Renegade Hoof Boots in front and I’d sorted a workable method for slinging the human food dry bags on the back of the English Saddle so that they rode just behind my legs.  It took about 45 minutes for the ponies and I to settle into a groove; Finehorn kept changing sides and Jesse was flicking at flies with his tail – he tends to Rodeo when the rope gets under his tail – so I had my hands full for a bit and then suddenly there we were, riding down the road in the sunshine, feeling like “Yes, this is what we do.”  We arrived at our destination by noon, having covered 10 miles (averaging 3mph) none the worse for wear. The cut-out pad over Finehorn’s withers worked well and the ponies were turned out in a pen with a young steer and a nice bale of oat hay. 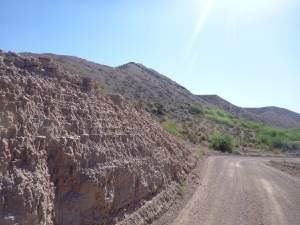 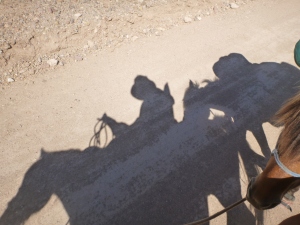 That afternoon my host and I went to return a stock trailer and then went to the Fort Thomas bar’n’grill for a burger.  Suddenly a board of delicious cheeses was being passed along the bar, courtesy of a couple who had just returned from South Woodstock, VT where they’d been visiting their son who works with the Farmstead Creamery.  We got talking; turns out they’d done a bunch of packing with mules and on the spur of the moment it was decided that I was going with them up to their mountain cabin in Forest Lakes for the weekend.  (Which is where I am writing this now.)  Friday morning the ponies and I were trailered over to their Dairy, bags unloaded, ponies turned out into a lovely large paddock where they’d be cared for in my absense – and suddenly I realized that my custom Vagabond travel guitar (Swallow) was not with my gear.  Frantic, I called my host of the night before; it wasn’t in the truck or along the dirt road into his place.  I called Steripen, since my water purifyer rode in the guitar case, and they offered to send a replacement ASAP (and were incredibly patient and sympathetic about the guitar.)  I helped load the truck and we headed up to the cabin.  Not too far along I spotted the guitar case by the side of the highway.  I ran back to get it and my brief flash of hope evaporated.  Swallow was shattered.  The Steripen Adventurer had survived, so I called Steripen and let them know I was ok on that front at least.

Miles and hours and saguero in bloom (wow! – never seen that before!) and 6000′ of altitude later we arrived at the cabin.  It’s not hot up here at 8800′.  It’s beautiful and there are pine trees.  The company is congenial and to say that there’s plenty to eat and drink would be a gross understatement.  There are kids and dogs to play with and my internet works!  Which is how I’ve been tracking the latest development.

The Gila Wilderness is on Fire!  122,000 acres already gone and it’s still not under control.  The estimate is that the fire will eventually claim 360,000 acres.  The historic ghost town of Mogollon is under mandatory evacuation.  This is pretty much exactly the area I had planned on riding through for the next several weeks.  The predicted direction of spread is N/NW – which is the area between me and Colorado and cooler, grassier climes.  Which brings us to the next factor -> recently burned areas generally offer very little in the way of graze for ponies.  I had been planning to ride up the Black Hills Back Country Byway and then over into NM, riding out probably this coming Wednesday.  At this point I’m keeping a very keen eye on the fire and its progress – and to say I’m a little freaked out would be a gross understatement.  I’ll keep you posted.

4 Responses to where i’m going is on fire…