As we sit here at the Tule State Elk Reserve, mountains are visible to the south for the first time in months. This is both exciting and terrifying, as it means we are nearing the end of our trek through this vast desert that serves as America’s bread basket.

The past 10 days have been both fruitful and absurd, and a million things in between. We have been delighted by random passersby, surprised and horrified by some of the places we have ended up and unhinged by new news of our fates. 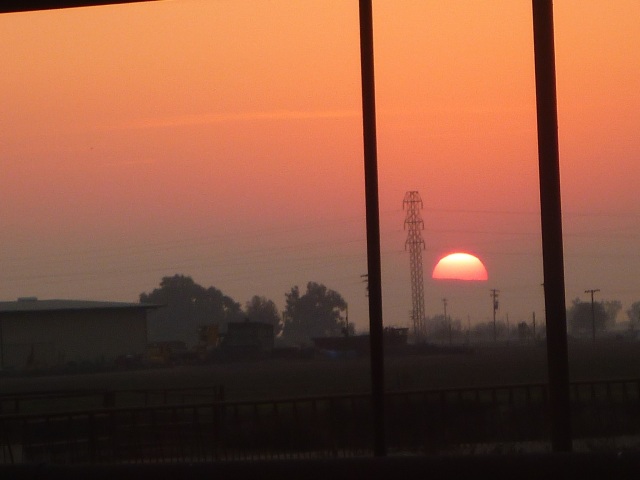 11 days ago found us walking down the road (Sea was walking and Gryph riding) when a Farm Fresh Foods van passed us, then stopped. A good looking young man stepped out, and quickly proceeded to rap off a whole sales pitch about the finest steaks, restaurant quality, on sale now and would we like to buy some!  We giggled, asking him how he thought we were going to cook fine steaks. Well, it took awhile to convince him that we were not just a mother and daughter who lived on a ranch down the road out for a quick joy ride, as he had thought. When he finally believed us, he was so excited and supportive of the trip that he went back to his van and pulled out a whole box containing 7 flash frozen air sealed premium steaks. We were so happy that we probably sustained on that good energy alone for the next 6 miles, until things started to look so bleak that no one was smiling anymore… 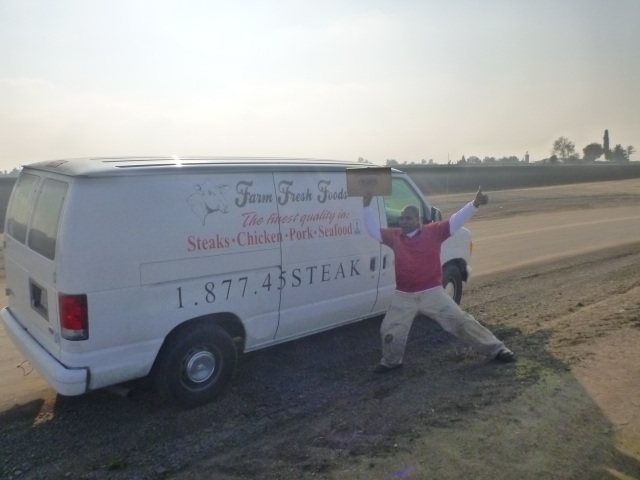 We came to the town of Corcoran, but instead of heading into the lights and concrete of civilization, we pushed on down highway 43, even though the sun was beginning to slip and each step was screaming agony for Sea and her blisters. Soon after we made that turn, we feared that it was an irrevokable mistake. The almond orchard with its parched ground and rows of small trees was endless, with barbed wire and No Tresspassing signs. The other side of the road was not any friendlier, also bordered by barbed wire, keeping us out from factory farms with bright lights and tractors on cement. We trudged on because that was all we could do. We passed vacant lots of machines, more barbed wire, and eventually the Corcoran State Prison, which looked menacing and haunted by cold bright lights on the opposite side of 43. Can’t stop there.

It was pitch black by the time we found anything that looked like an occupied home, lit up and boardered by alfalfa fields. We treked down the winding cement driveway for about a quarter mile before we came to the house, where a family was bustling around getting into cars. Gryph approached out of the darkness on Finehorn. “Where did you come from?” asked the woman, bemused. We told her our predicament, and she explained how they were just headed out of town for the weekend…..Well they saw in our desperation that we really had no other choice, and offered their lawn and empty corrals in their absence. They even suggested that we have a campfire to stay warm, and pointed to a hefty stack of firewood that we were welcome to. How generous this couple was, and we never even exchanged names! That night we had a campfire, and cooked up the most delicious and amazing steaks we had ever tasted in our trusty skillet.

1 Response to Flash Back: Corcoran